The documents you are attempting to access are being made available on this website by 2Performant Network S.A. in good faith and are only for information purposes. These documents are not directed at or, as the case may be, accessible by persons in the United States, or persons resident or located in Australia, Canada, Japan or any other jurisdiction where the extension of the availability of the documents to which you are seeking access would breach the applicable law or regulation.

The documents do not constitute or form a part of any offer or solicitation to purchase or subscribe for securities in the United States, Australia, Canada, Japan or any jurisdiction in which such offers or sales are unlawful (the “Excluded Jurisdictions”). The securities in connection with which an offering is pending have not been and will not be registered under the U.S. Securities Act of 1933, as amended, or under any applicable securities laws of any state, province, territory, county or jurisdiction of the Excluded Jurisdictions.

We concluded the capital increase operation and attracted a total of more than 5.3 million lei

The private placement, scheduled for August 5-18, was closed in advance due to increased demand from investors.

During the private placement, 19.62% of shares from the total offer which had remained unsubscribed in the first stage of the capital increase operation were offered at the price of 30.491 lei/share.

Due to the high demand, 2P shares were oversubscribed by almost 16%, with 12 investors participating in the placement resulting in a 1,109,902 lei investment.

Previously, during the first stage of the increase, 502 investors had participated with amounts ranging between 57 and 282,764 lei, so that at the end of the public offer 80.38% shares of the total offer had been subscribed and over 4,2 million lei worth of funding had been attracted.

2PR02 allocation rights were activated on the accounts of the investors who participated in either of the two stages.

Within the capital increase operation, we attracted the total amount of 5,325,885 lei.

We are a growth tech company.

We are the leader of the affiliate marketing sector in Romania, and we generate over 10% revenue from external markets.

NOW is the right time and the right spot for us: at the crossroads between e-commerce and digital marketing, two industries developing fast in Romania and CEE.

Our strategy is to capture the growth in the markets where we already have a strong position, Romania and Bulgaria, and expand on new markets through the technology we have developed in-house and through our validated product: affiliate marketing.

We are set to reach the next level for 2Performant’s business: scaling and addressing new markets.
And for this, we need capital.

About the capital increase

We are a fast-developing growth technology company, we are constantly growing, and this investment of 5 million lei will help us to consolidate our leading position in the affiliate marketing we have in Romania and to increase our presence in the markets.

The 2P shareholders have approved this operation in AGEA on March 22nd, 2021. Our objective is to obtain 5 million lei capital that will help us accelerate the growth on external markets and maintain a double-digit growth pace on the Romanian market.

You can read here about the opportunities we have and the projects we will finance this year. 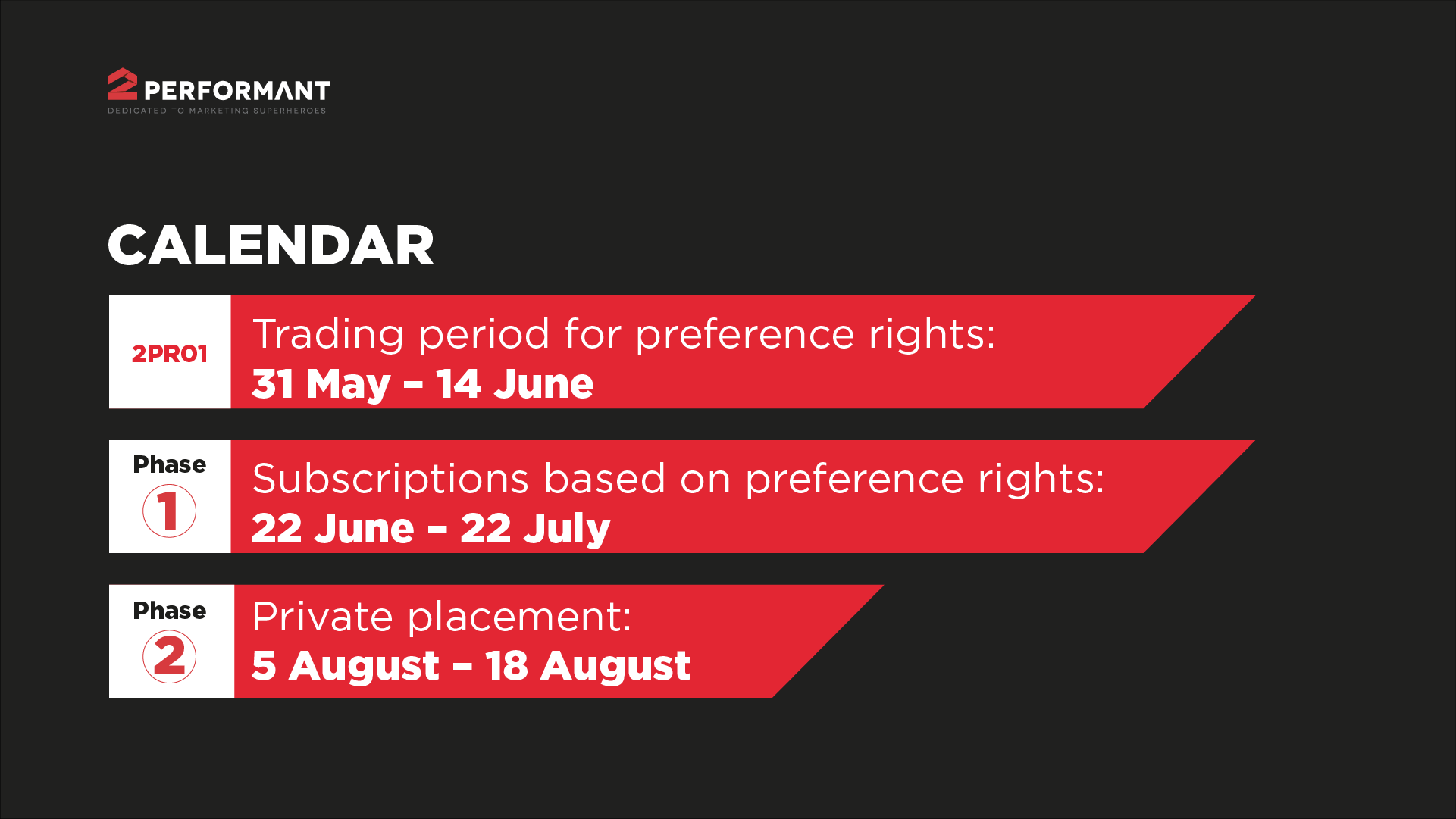 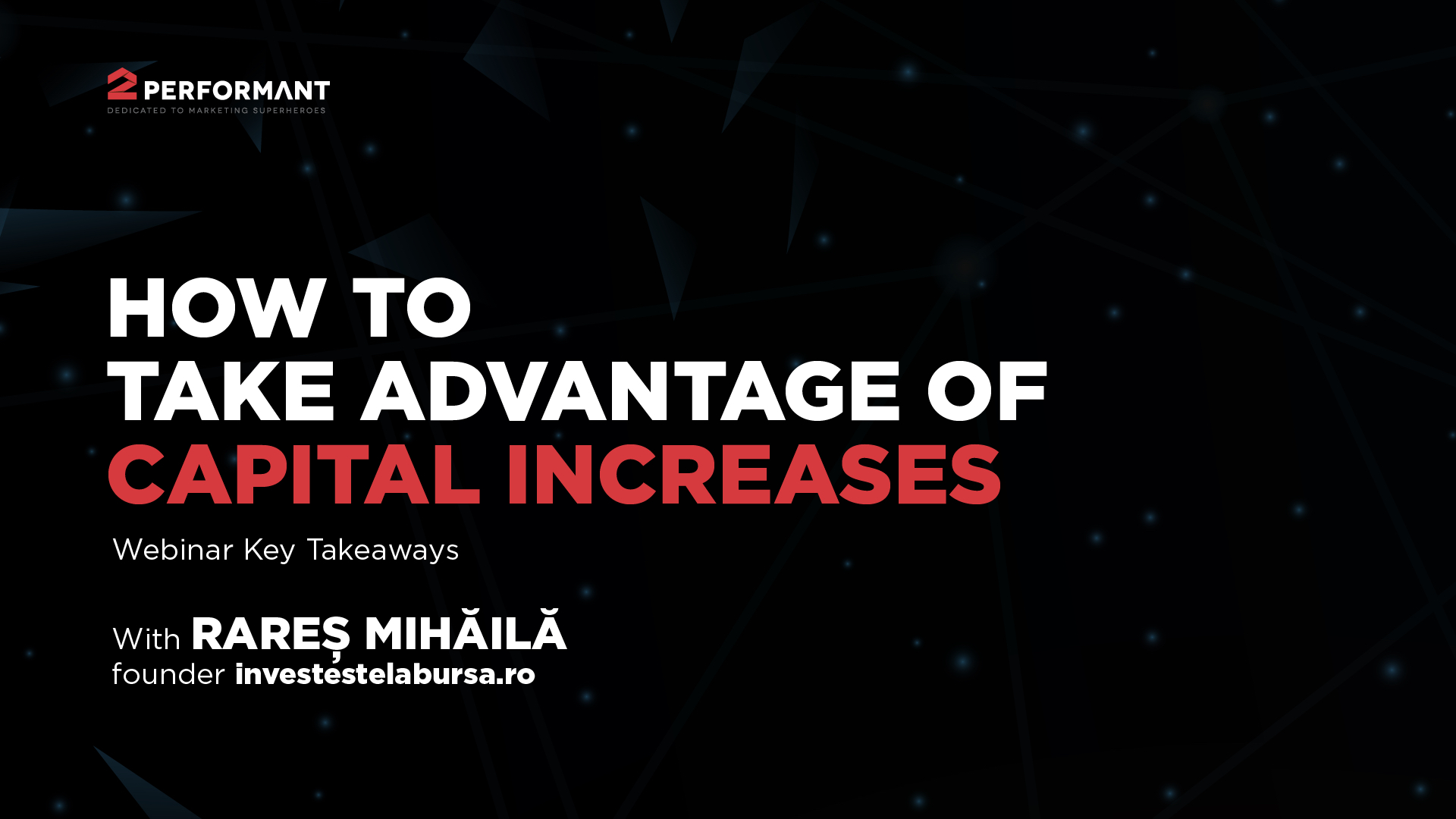 How to take advantage of capital increases 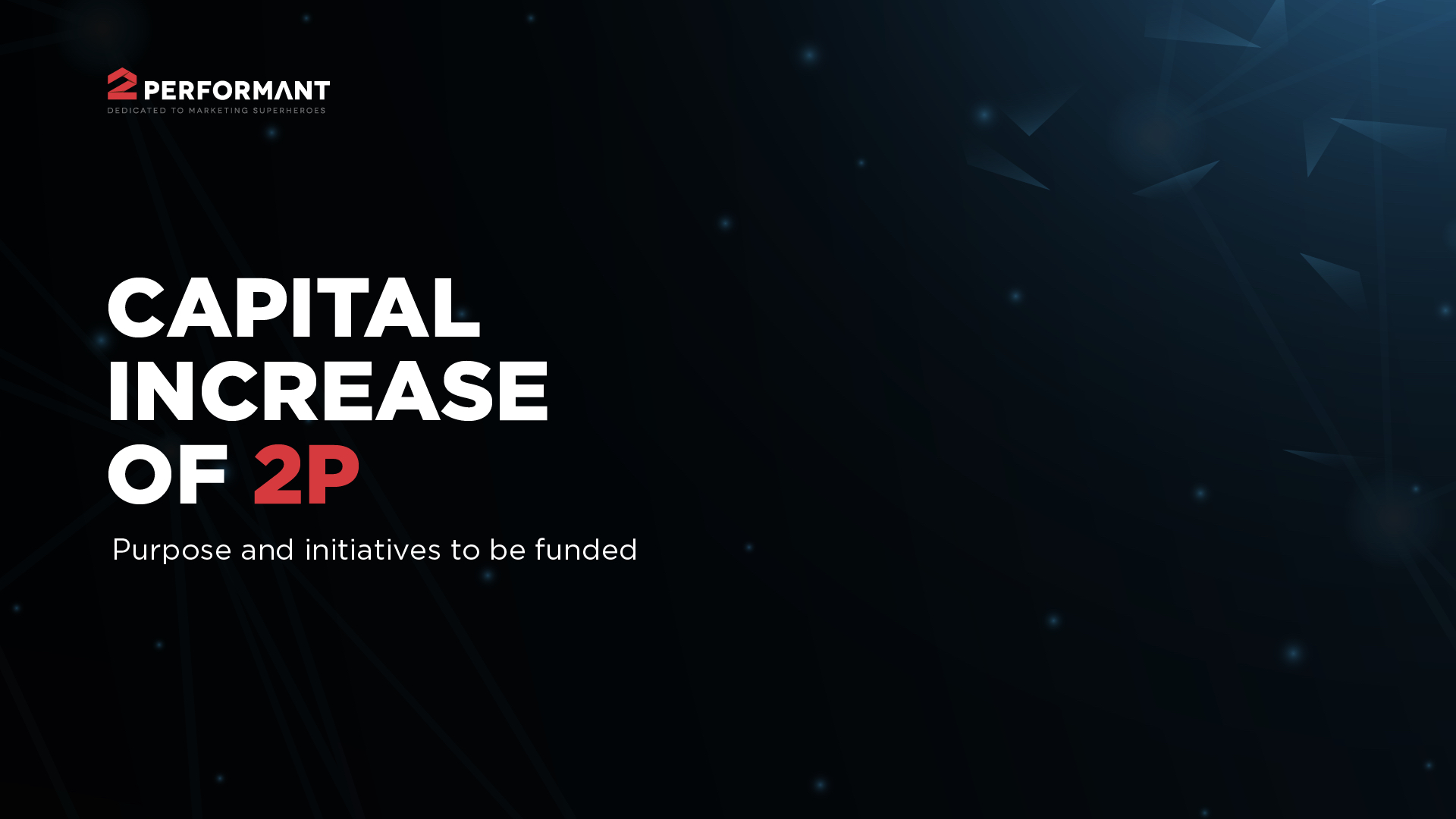 Purpose and initiatives to be funded 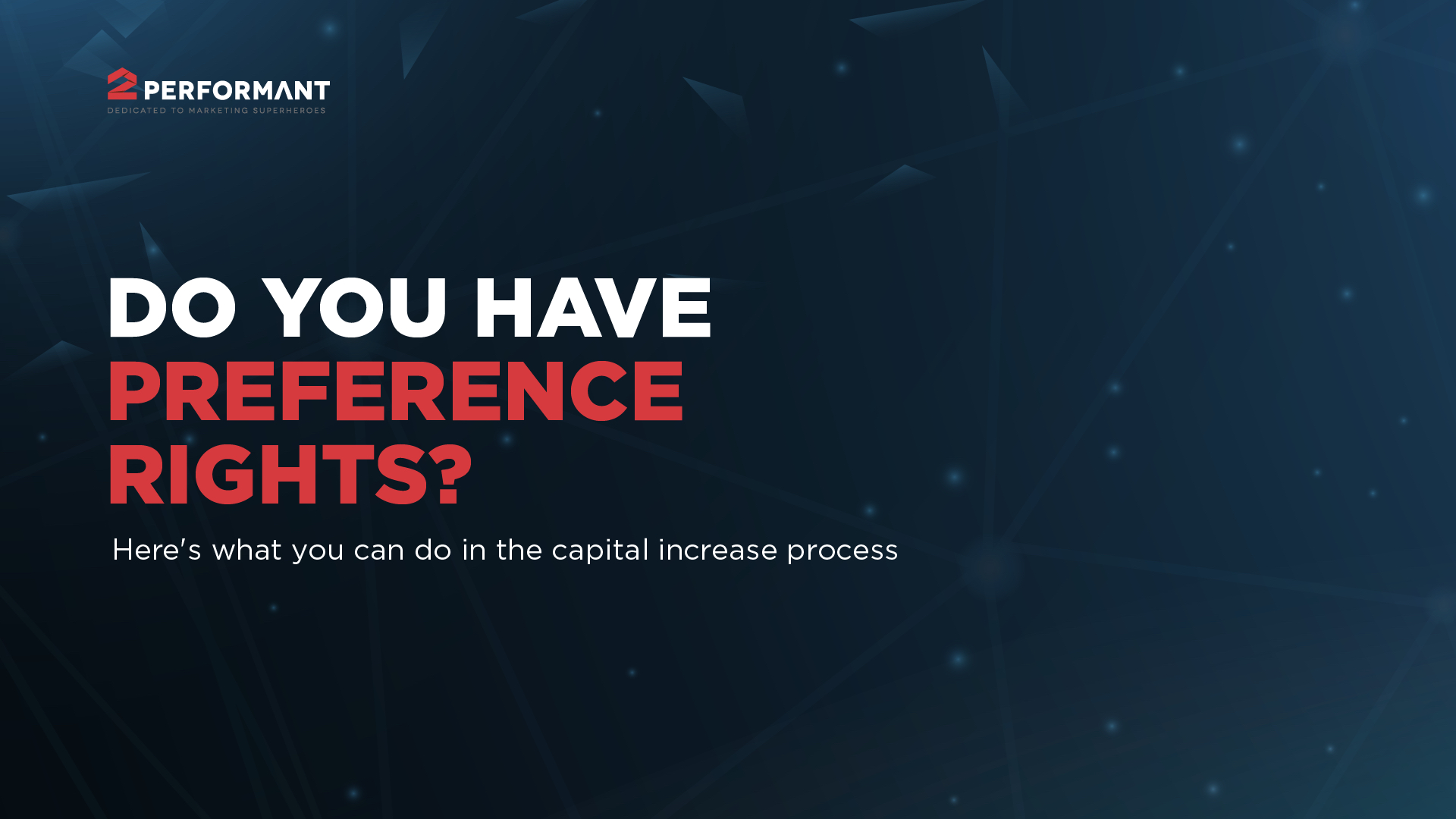 Do you have preference rights?

What can you do during the capital increase 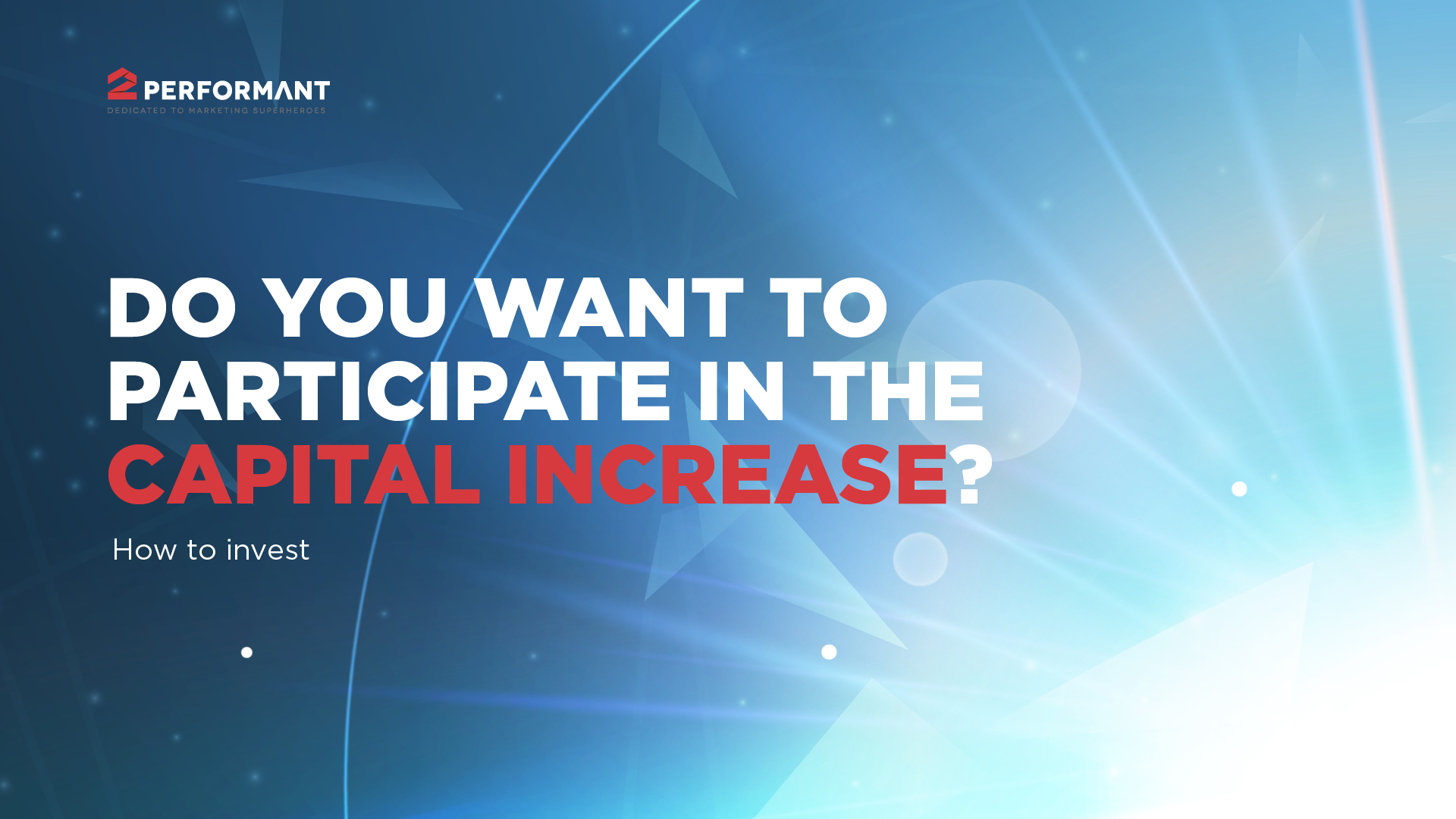 You want in on the capital increase? 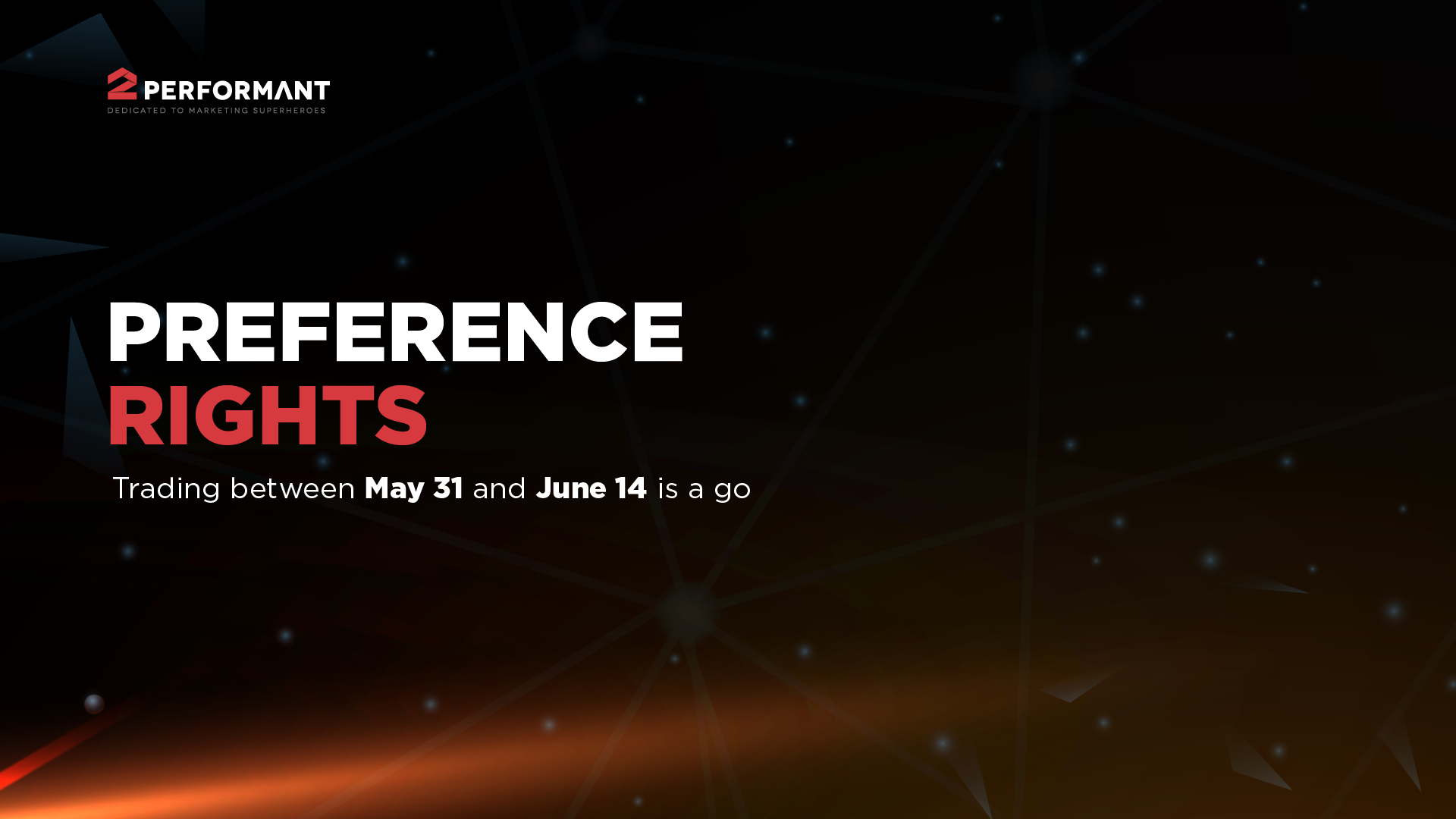 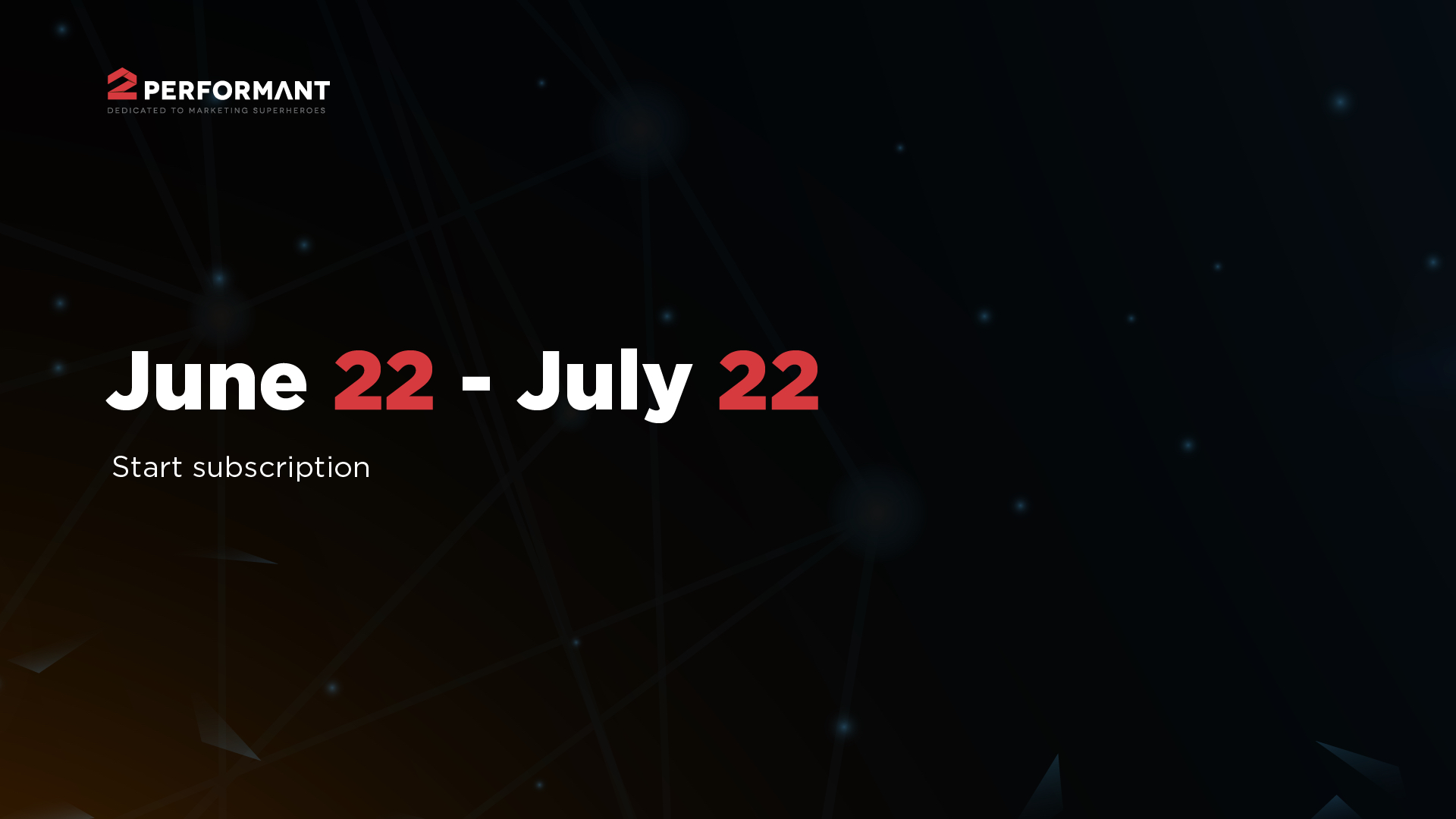 Subscription period – between June 22 and July 22 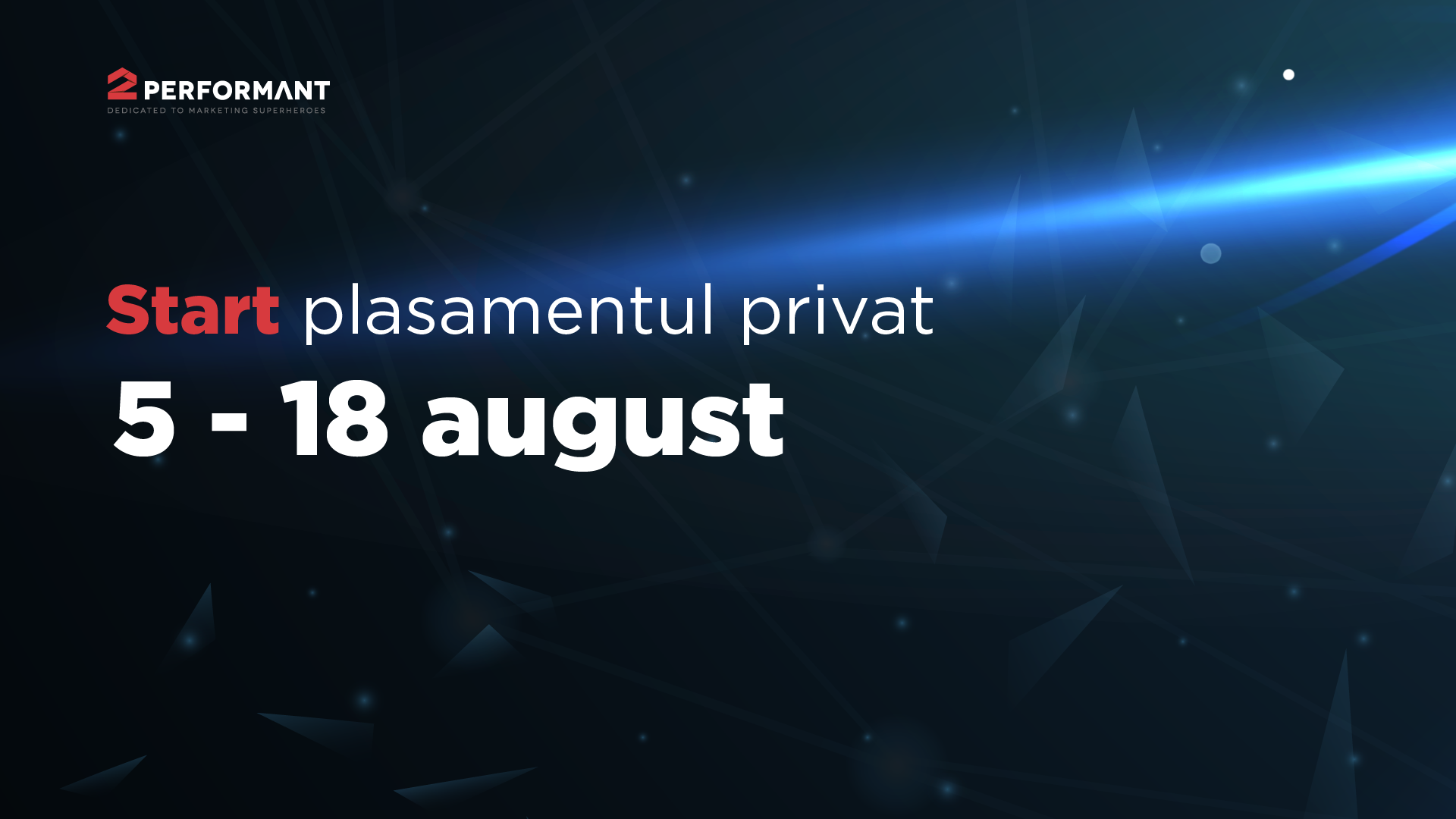 The first stage of the capital increase has ended

80.38% of total subscribed shares and over 4.2 million lei of funds were attracted 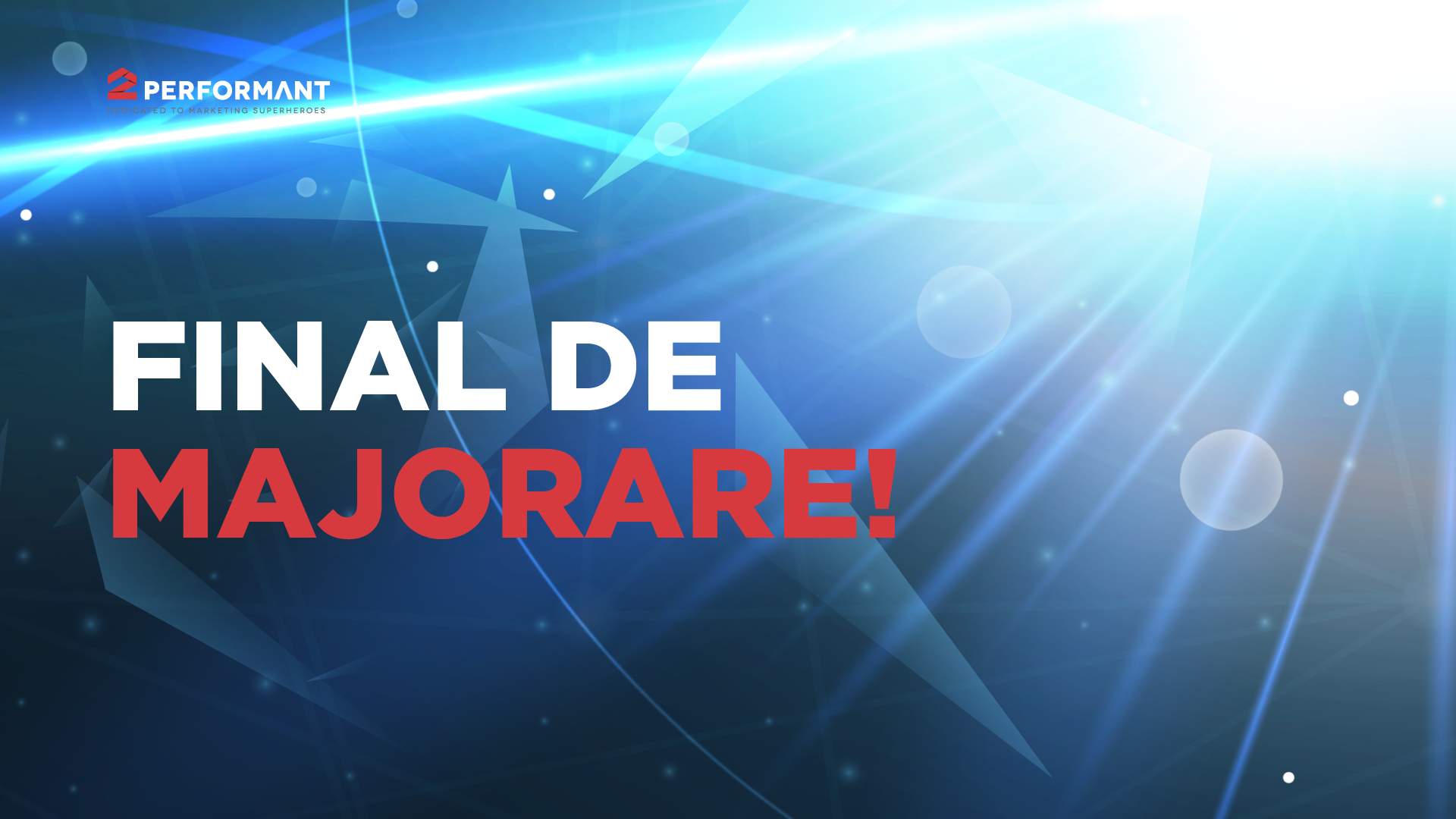 Within the capital increase operation, was raised the total amount of 5,325,885 lei

For additional information about the capital increase or the 2P activity on the BVB, please contact us at: investors@2performant.com, +40 374 996 354.

To be up-to-date with the phases of the capital increase as well as with general news on 2Perfromant’s evolution on BVB, we invite you to subscribe to our investors` newsletter here.

Why does 2Performant make a capital increase?

Our intention is to raise RON 5 million for the development of the company, capital that will support the following three investments:

How can I participate in the private placement?

What is the price at which I can buy 2P shares in private placement?

The price of a 2P share in the private placement has been established at 30.4910 lei, higher than that of the public offer, a price calculated according to the following formula: the subscription price (28.2764 lei, as dictated by exercising the preference right) + the weighted average price of the 2PR01 rights  (0.38956717 lei) x the number of rights necessary to subscribe for a share in the public offer (5.68424).

What are preference rights?

Preference rights are offered to shareholders in the event of a capital increase, in order to give priority to existing shareholders to participate in the new round of financing, in ordet to maintain the same participation in the company as before the increase, reflected as % of shares held.

During the EGMS from 22.03.2021, 2P shareholders approved the capital increase of 2Performant Network with a maximum number of 185,500 new shares, representing ordinary, registered and dematerialized shares with a nominal value of 0.1 lei / share.

In order to subscribe 1 new 2P share, investor needs to have 5.68424 preference rights in his account. If, following the mathematical calculation, fractions of shares result, the maximum number of shares will be rounded down to the lowest natural integer.

You can find out more about the capital increase process in the special webinar we organized together with Rareș Mihăilă, during which all the key questions related to the share capital increase operation were addressed. The webinar is available HERE.

What can I do with the rights?

If you received rights, you have the following options:

You can also decide to do nothing – neither participate in the capital increase, nor sell your rights.

When can I trade the rights?

The preference rights 2PR01 were traded for a limited period from May 31st, until June 14th.

The subscription price per share was set at 28.2674 lei/share. The price per share includes the share nominal value (0.1 lei) and the issue premium (28.1764 lei). To subscribe for a new 2P share at this price, 5,68424 preference rights are required, rounding to the nearest lower natural number.

What follows after the trading of preference rights?

The timeline of the capital share increased operations is as follows:

May 31 – June 14: 2PR01 preferential trading
Stage 1 June 22 – July 22: Investors holding preferential rights have 31 days to subscribe for new shares
Stage 2 August 5 –  August 18: Private placement – if unsubscribed shares remain at the close of the first stage, they will be offered to a maximum of 149 investors in a private placement, at a higher price than the public offer

Are preference rights the same as free shares?

Important: The capital increase by cash contribution will take place first. This means that if you participate in the capital increase by cash contribution, for the new shares you will subscribe, you will also receive free shares (4 free shares for each share owned), as long as you keep them until the registration date (which is not yet established).

The management decided to offer the free shares for the shares that will be newly subscribed in the capital increase process through a cash contribution, in order to reward and motivate our investors to participate in the operation. Consequently, the distribution of the free shares will take place after the closing of the capital increase operation with cash contribution. The reference date has not yet been set. As soon as the capital increase with cash contribution is completed and the Board of Directors establishes the timetable for the distribution of the free shares, we will issue a current report with all the details, including the reference date as well as the ex-date. At this time investors who decide to buy 2P shares and will keep them until the date to be set by the Board as the registration date, will benefit from free shares in proportion of 4 for each share held.

What are the stages of a capital increase process?

Firstly, ASF (Romanian Financial Supervisory Authority) must approve the prospectus for the share capital increase. After approval, the steps to be followed are:

Do I need to have a trading account to buy or sell rights?

Yes. You can buy or sell your rights through any broker in Romania. Goldring offers special conditions for opening and operating the account to persons wishing to buy or sell rights or shares 2Performant:

To benefit from these conditions, select the code “2Performant” in the “Source of recommendation” on the account opening page.

I have the necessary rights, how can I subscribe?

The period for subscribing 2Perfomant shares based on 2PR01 preference rights was between June 22 and July 22, 2021.

At the end of that stage, 80.38% of the total offer have been subscribed and funds worth over 4.2 million lei have been attracted.
The shares were subscribed based on the 2PR01 preference rights at the subscription price of 28.2764 lei per share.

Where can I find more information?

You can find on our website at the Capital Increase section all the information and documents related to the capital increase operation.

How can I find out more?

If you have other questions about the capital increase, you can send us an email at investors@2performant.com.

We’re inviting you to subscribe to our investor dedicated newsletter and to follow us on our Social Media channels.